When it was clear that Hoge Fronten could not go ahead with a performance with the local community of Mrkopalj, they went ahead with a completely different online performance, organized from the Netherlands together with the local community of Mrkopalj. They could only do so because of the research material they had collected during their visits as artist in residence By bringing this material from the back to the foreground it became part of the performance. The initiative has unveiled their working process and is perceived as a good practice of how to co-create with local communities.

Hoge Fronten is a Dutch performing arts foundation situated in an old cement factory in the city of Maastricht. Theatre maker Lieke Benders has been general director of the Hoge Fronten foundation since 2010, and together with her team they create theatre programs with various changing themes both locally and internationally. Hoge Fronten’s main motivation is to literally involve and activate people as well as to create awareness of universal similarities rather than differences, by trying to cross boundaries of beliefs, religions, cultural norms and values. Hoge Fronten does this not by shocking people, but by providing interactive space, for opinions about current events and themes. The core business of the foundation is to develop and produce theatre performances, location projects and media productions, for both children and adults. The foundation achieves its goals by raising funds, applying for grants and creating brand awareness through press and media. Productions are usually collaborative efforts together with partners, both national as well as international (Hoge Fronten n.d.). “Mrkopalj, the best place ever” selected for this case study, is an example of such a collaborative effort. On invitation of the organization Cultura Nova and in collaboration with Centriphery. Centriphery is an European initiative of several organisations. Cultura Nova, an international theatre festival, is an organization which stimulates international and professional artists to work with local artists and citizens of a specific location. Centriphery develops, together with its artists, performances about local myths (Centriphery 2021). When Croatia participated with Rijeka Cultural Capital of Europe 2020 they wanted to make the cultural capital year also inclusive to its periphery, the surrounding small villages in about 27 municipalities in the vicinity of Rijeka. For this reason Mrkopalj fits within the Centriphery initiative. Cultura Nova invited Lieke Benders, because of her experience in creating productions in and with local communities. With the help of Centriphery, which had a European budget available, Hoge Fronten was able to realize STILL.Mrkopalj and travel to Croatia in order to create a performance (Benders 2021).

In October 2019 and early 2020, Lieke Benders, writer Saskia de Haas and composer Jolle Roelofs and local artist Tajci Cekada were invited as ‘artists in residence’ at the request of Cultura Nova, in order to develop a location based theatre project as part of the Rijeka 2020 programme. They were invited to Mrkopalj; a mountain village with 1100 residents. It turned out to be a small rural community, but with global problems, with nearby refugee routes, depopulation caused by young people fleeing to cities but, most importantly, climate change has had a devastating effect on the village economy which used to be dependent on ski-tourism.

After having ‘infiltrated’ the community, the village’s cultural capital was mapped by the artistic team; Mrkopalj’s local musicians, a very active church choir, and a Twin Peak’s like décor featuring a sawmill where most of the remaining villagers work. This cultural capital became the core of the performance that was developed; it was to be a big performance in the sawmill with music composed by artist in residence composer Roelofs and music performed by local musicians, the local choir and the local artist Tajci Cekada .

Then Covid happened; just when in the everything had been programmed, organised and the performance was set to go, the artists from the Netherlands were not able to make a presence due to travel restrictions and no public could be allowed due to a lock-down. The show was cancelled.

Hoge Fronten decided it did not want their research consisting of, daily journal entries, 360° camera footage of the village, interviews of villagers and sound fragments go to waste, and neither did they want to let down the local community who had welcomed them so warmly (Benders 2021).

On top of that the virtual performance also gave the opportunity to reach an international audience, whereas the original performance would have been in the local setting of the sawmill. (Stimac 2020).

The audience had to make a reservation, and received instructions via e-mail. At the start of the performance, you were welcomed by the creators of the performances in an online space. Once the performances started, you would walk through the village as a tourist in a 360-degree video accompanied by local stories and sounds (Hoge Fronten 2021). The audience then virtually met the villagers themselves, with local artists performing from their homes with the possibility to interact with them. The 360° video is still online, whereas the performance itself has been carried out two times in real life.

The new performance made it possible that people could visit another place far from home and also feel invited in a local community. It also gave the possibility to visit multiple places within the community, creating multiple perspectives on the same place. As the main programming of Rijeka 2020 was concentrated in Rijeka, the performance in Mkropalj would have been less accessible because of its location, the shift to online programing makes the programming of the periphery more accessible to the (urban) audience. An idea for future program makers to take into consideration.

The main audience of the performance were 70 % Dutch, 15% Croatian and 15% other. The video received a broader audiences as it was used by the Rijeka 2020 organization for finalizing the initiative. The impact on the local community is not part of this research scope, however, installations of photos were displayed and the film was broadcast in the village by way of physical closure of the project, it is to be expected that seeing the local cultural capital in the limelight like this may well have had a positive impact on the local community.

The most important impact of the project on the organization is that the collection of a lot of raw material, before Covid-19, was mainly used as a source for inspiration for the performances. It made it clear to the team that research material can be transformed into more than just that, and can be used to create new products. They will continue to put a lot of attention into research and documentation in new projects to come. The changed Mrkopalj project has made visible, also to the outside world, the way the Hoge Fronten researches and collects documentation from local communities and how it prepares performances together with these communities. This preparation method has received attention from other organizations working with local communities. For example, Studio Europa, a research centre whose aim is to keeping the legacy of the treaty of Maastricht alive, has asked Hoge Fronten to keep track of their work processes in order to learn from them how to interact and co-create with local communities. Examples include the importance of keeping daily journals, doing research into small and practical issues, such as what ticket prices are reasonable to ask in a different regions, and how language barriers are not as problematic as anticipated.

The change to a virtual performance has also had its struggles, the virtual performance was dependent on the willingness of the local population to actively prepare themselves to be online at a specific time, as the organization was presenting from The Netherlands. One lesson learned is that the involvement with each other wears off if no physical presence is felt, therefore, they stooped after two live performances. Because of the importance of being present Hoge Fronten now focusses on regions that are closer to home, such as Germany and Belgium.

The Mrkopalj case demonstrates how showcasing a working process towards a goal, next to, or in combination with, or even instead of the final performance can an interesting angle to take. The research process is in this way shifting from the back to the foreground. It is convincly demonstrated in this case, that displaying fragments of raw material such as interactions written down in journals, 360° photo’s, sound fragments can be of interest, not only as preparatory material, but when presented well, also to the an audience. 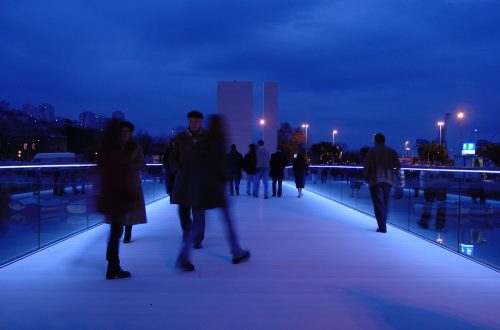